All Clothing Is Handmade 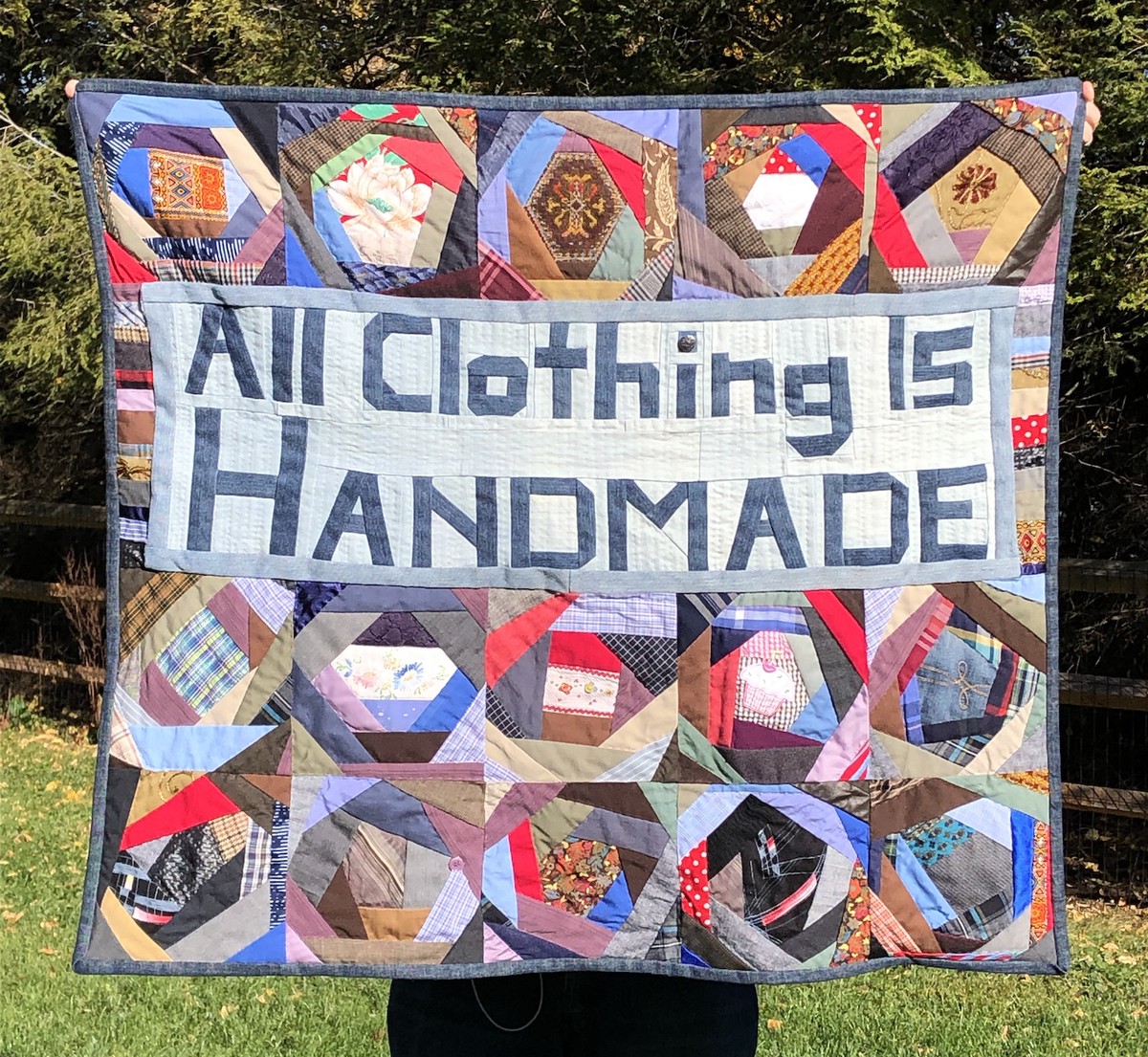 The idea for this quilt came to me several years ago. Besides making quilts, I make some of my own clothes and occasionally make clothes for people in my life. I made my own wedding dress and one for a college friend as well (and never doing that again).

There’s something special nowadays about something that was made or tailored just for you, whether it was done by a friend/family member or something you had made. When I was a kid, my father gave my mother a birthday gift of what was essentially a copy of her favorite dress, made by a local seamstress. The style was pretty basic, but not being sold in stores at that time. I’m sure it was quite expensive. It was very thoughtful, she loved and wore the dress for ages, until her cancer surgeries made its fit uncomfortable.

But while I love the personal connections of bespoke/self-made clothing, I want to push back a bit against some language that occurs when people (myself included) talk about store-bought clothing, especially cheaper clothing. Whether it’s the nice Lands End flannel shirt I’m wearing as I write this, or the one my husband is wearing that I made for him, or the TikTok influencer’s Shein t-shirt that rips when she tries it on… all clothing is handmade.

I made this quilt using worn textiles from friends, family, and some folks in my church and scraps from my own projects. It’s got a piece of fabric from my wedding dress and others from one of my mom’s favorite dresses. There’s a couple of my husband’s old dress shirts, bits of my father’s ties, the lining of my little sister’s worn jacket, highlights from a friend’s tunic, bits of baby dresses, another friend’s dress shirt, and more. There’s a couple little pieces of leftover fabric from that same flannel shirt my husband is wearing right now.

I pieced it ages ago, I can’t quite even remember… 2020? It’s a wonky quilt, dozens of fabrics that were never meant to sit side-by-side. A little leather just for fun and frustration. It took forever to figure out how I wanted to quilt it (large stitches with long strokes, colors matching as best I could in the blocks themselves) and then to get to it, but I’m very glad that it’s done and I can share it now.

21st century textile production happens on a massive scale, one that keeps ramping up and has enormous environmental costs. The quality of mass-market textiles has dropped noticeably since the 1990s, which were also a noticeable drop from the 1970s.

When people talk about this change in quality, the language often carries a set of assumptions. These assumptions are often both geographically and racially coded. “This t-shirt was made in Honduras” or “This blouse was made in Cambodia” imply things about their quality and often subtly, sometimes not-so-subtly, attached to the people actually doing the work.

But even if one assessed ten thousand blouses made in Cambodia for their quality, any negative findings say nothing about the talents or potential of Cambodian garment workers as a whole or relative to, say, American garment workers. What they reflect instead are:

These decisions are all made by the company that ordered the clothing and, quite possibly, also by one or more subcontractors. While brands may plead innocence and outsourcing, the cost per item they demand from their suppliers directly influences this…and they know it.

How does the way we speak of textile manufacturing (especially that done in East Asia) create and reinforce perceptions of East Asian women’s (primarily in our perception) capacity to do high-quality sewing? Why do we let it reflect on them instead of on the companies which made the choice? What can we change about our how we think and talk to change that stereotype?

In thinking about this, I was inspired by many of the books I’ve read but also by Janneken Smucker’s Amish Quilts. In particular, she delves into perceptions of Hmong women in Lancaster County and, later on, in refugee camps in Thailand, who sew “Amish” quilts. Is there something about an Amish woman that actually makes her a better seamstress or is that our racial perceptions? (yes, the latter)

Also check out the documentary Invisible Seams by Jia Li and Jodie Chan, which interviews eight Asian seamstresses and pattern-makers in the New York garment industry. I only came across this a week ago, just before finishing the quilt, but it spoke to another element of the same thing. Check out this interview with Jia and Jodie where they go into more depth about the project and what they didn’t have space to cover.